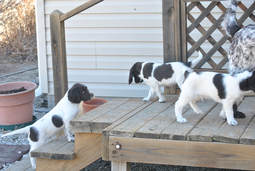 When you get your Hunting Hills puppy comfortable in your home and it will be ready to begin his/her basic training. It is important that from the beginning you let the dog know you are the boss or leader. Make sure all family members know what the game plan is for the puppy's training, the commands to use, and have everyone follow it. This gives the pup a consistent base to learn from.  Remember if not done properly everything the pup learns may have to be retaught.

Make sure your pup enjoys their training. Basics such as your puppy learning its name, coming when called, retrieving, house-breaking, sitting, learning the meaning of ‘No’, learning to go into the kennel when told, learning not to bark unnecessarily, leash manners and getting into the vehicle are all elements that should be learned in your pups first 2 to 6 month.   An important rule at this stage is to keep it all brief and enjoyable. Always end the training session in a positive manner. Stop the sessions before they become boring and always on a positive note.  Never give a command to your pup unless you can back it up.  Use a check cord or leash when training.  The first commands to teach are "here or come", "kennel", and "no".  When these commands are learned teach "whoa", "heel" and "sit".  Yard work must be learned fully before your pup can perform the commands in the field.  80% of hunting is successful yard work so train daily for a short time and keep it fun. While there is a place for more rigorous training, it is a long way in the future. 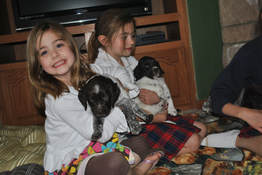 A big aspect of your pups training that must not be neglected is socialization. The gun dog that gets on well with everyone, people and dogs, and is not upset by new and unexpected experiences is a joy to own. Get your pup used to everything - noises, children, older people, delivery people, other dogs, trucks driving by, stairs, the dark, wind, aircraft, other people’s cars, and everything he might conceivably come across and then some. Be sure that no people in your family, in your neighborhood, or a passer-by tease your puppy.  A dog that is teased or frightened by children or adults becomes a dog that snaps or bites to protect himself from the teasing.  This can carry over to others who do not tease him. So make sure your pup is always treated in a safe and secure way.

​Allow your new puppy to become used to all house and outdoor noises in a safe way.  Don't allow children to tease or scare the puppy with a vacuum cleaner, fireworks, or other loud noises. Your puppy should be properly socialized to everything.  Take it everywhere possible with you. Keep it safe, keep it in a crate for short rides when in a car or on a leash for daily walks in the city. 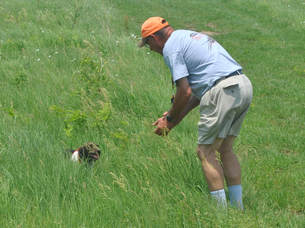 One of the great motivating factors for all young pups is food and a lot of valuable training can be done around meal times. Blow your whistle just as you put your pup’s bowl of food in front of him/her and it won’t be long before a toot on the whistle will be enough to bring it running.

​When your pup is eating, introduce a few loud noises in the background, clapping two pieces of wood together is a good idea. Throughout a period of weeks, introduce a starting pistol if that can be arranged. Before too long you will have imprinted a number of valuable field lessons, whistle recognition, name recognition, recalling, sitting and gunfire, all in a no-stress, happy situation.

When out giving your pup a walk, wait until its attention is on you, toot your whistle, call his/her name, bend over with your hands out and open in front of you to make a target for your puppy to come to you.  If the puppy comes to you slowly then step backward a few paces as he/she comes in to you and then reward him/her with a tasty tidbit when he/she arrives at your feet. Vary this by sometimes not giving him any food, replacing it with a lot of patting and praise. In time you will be able to remove the food from the situation completely. Add to this program a sit when he/she arrives in front of you.  To do this place a small piece of soft treat above his head and when he looks up at it and eventually sits, say the command ‘Sit’ and follow up with the reward of the a treat.  After he/she sits regularly you can replace the treat with patting and praise. 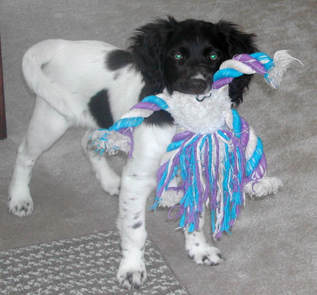 Basic retrieving lessons can be started in much the same way. Select a hallway with the doors closed or a similarly long space from which no real deviation is possible. Hold your pup gently in position, quickly get him/her really interested in a soft object such as a rolled up sock by saying here it is and shake it in front of him or tap it on the floor and throw it a short distance while he is watching it. When the object hits the ground, command - ‘Fetch it!’ - And let him/her go. If you have aroused its interest correctly, the moment you let him/her go he/she will be after it in a flash. The instant he/she picks it up, call its name in a joyous tone, getting their attention. Run back two or three paces, squat down so that you are at his/her level and nine times out of ten he will come bounding back to you. Don’t rip the object out of its mouth straight away, instead play with him/her for a few seconds of petting and praise and then gently remove it, using your release command or the word ‘Give’.  Again, follow this up with a mighty dose of praise. Do this three times each night and on the fourth throw pretend to throw the object, except hide it from view (place it in the back of your belt) and ask ‘where did it go’?  The next day your pup will be so excited that the object appeared again for his/her pleasure of the three retrieves.  A Small Munsterlander usually gets bored with too many repetitions so a very good excited three retrieves is better than having him let you know that he has had enough and he does not want to bring the object back for more retrieves.
​

Obedience classes are a great place for your pup to meet all sorts of dogs.  If you begin a class don’t just go for a few weeks, stick to it. The learning experiences that both you and your pup will get as he/she moves up through the obedience ranks are not going to be wasted when he/she is in the field. Some of the best versatile, field or retrieving trial gun dogs have spent time at the local dog obedience class.

​Basic training for your pup in these first crucial months is in many ways identical to that which applies to any dog that is going to spend many years as a performance or working dog. Learning to know and respect the boss or leader, becoming a good citizen, adjusting to his/her new home, combined with enjoyable play training appropriate to the future role in life, is of basic importance for gun dogs.    ​